I love camping and spending time outdoors in nature, so of course my favorite series this winter anime season is the relaxing Yuru Camp… Cute girls going camping while finding friendship and enjoying nature along the way? Yes, please! Sign me up! And, as a bonus, they also happen to eat all sorts of yummy-looking food while on their excursions!

Today’s recipe is from episode 5 of Yuru Camp, in which Rin tries her hand at cooking while camping. She’s not very experienced at cooking on the trail (usually opting for cup noodles) and decides to make a simple, creamy one pot soup-style pasta dish with bacon, mushrooms, and asparagus that can easily be recreated on the trail or at home.

This recipe is a simple, one pot meal that makes for a fancy dish to eat while camping, or a quick, warming meal made from the comforts of your own home. I took this recipe directly from the episode, and made only a couple modifications. The result is a creamy, slightly soupy pasta dish that’s sure to warm you up from the inside out.

It’s also a pretty diverse recipe, so if you want to substitute any other vegetables in (say, for example, green beans for asparagus), feel free to experiment!

I made a few changes to the recipe presented in the anime:

Bullion or consommé cube adds the flavor and all the salt you need to this dish. Depending on what brand you use, you may need a little more than stated in the recipe below. A word of caution: add it gradually rather than all at once to avoid your pasta from being too salty or strongly bullion flavored.

White button mushrooms are used in this recipe instead of shimeji mushrooms simply because that was what I could easily find where I live. Other mushrooms would probably work great in this recipe, too. If you can find shimeji mushrooms (often sold in asian grocery stores in packages), try it out! To prepare, just cut off the bottom of the mushroom clump where the stems all come together. Then, separate out the individual mushrooms.

Pre-sliced cheese is added to the pasta in the anime for ease of use while camping, but if you’re making this at home, you can also easily substitute in two slices of your favorite cheese. I used gouda in mine (that was what I happened to have in the fridge!), but other milky, semi-firm cheeses (cheddar, mozzarella, etc.) would work wonders, too.

Bacon adds a lot of flavor to this dish, as well as a good dose of saltiness. I used a block of bacon that I could slice myself. It was pretty lean and maybe a bit saltier than typical North American thin sliced bacon that comes in packages. Blot the bacon fat using a paper towel before adding the pasta if you feel it’s too greasy. (I didn’t because my bacon was very lean) 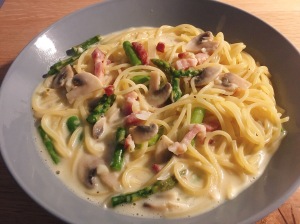 Serve straight out of the pot while on the trail camping, or in a bowl from the comforts of home. Goes well with a slice of bread to soak up any leftover soupy sauce.

The soup-style pasta is ready to eat!

13 thoughts on “Yuru Camp’s Creamy Soup-Style Pasta with Bacon, Mushrooms, and Asparagus: Perfect for some Laid-back Camping or the Comforts of Home”